It's common knowledge that people generally forget about the stunning scenery available on their doorstep. This doesn't only happen in Britain though. People in Iceland are just as likely to neglect their landscapes as we are. Come summer, we want nothing more than to pack out bags and get out of Britain as quickly as possible for a break away. Here in Britain, we can surround ourselves with beauty and tranquillity without having to fork out for a plane fare. We have 26,000 miles of unspoilt bridleways just waiting for you to make the most out of them!

Martin Dean from Visit Britain Super Blog has nothing but praise for Britain and its patchwork fields stretching to the horizon. For its ancient hills and mountains rolling down into dunes and sandy beaches on the coast. For its rich green woodland and country lanes. He believes that Britain's great outdoors is a feast for the senses, and an adventure waiting to happen. But cycling is not only a fun adventure. By exploring new places by bike also you'll be doing your body countless favours, and you have to admit that being outside on two wheels beats any session on a stationary bike. One of the best feelings in the world is having air rush through your hair, and the excitement of descending an enormous hill after a tough climb.

Martin Fletcher writing for The Times makes some excellent points about why we should all be out on our bikes. He says that the great thing about cycling is that you travel slowly enough to enjoy your surroundings, but fast enough that you are constantly changing. 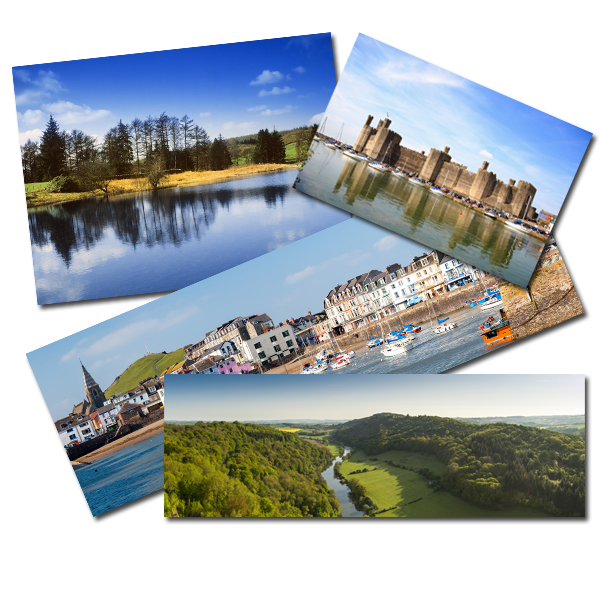 The Forest of Dean is one of the surviving ancient woodlands in England. It's also home to deer and, would you believe, wild boar. Now, if these facts aren't enough to get you pulling the bike rack out of the garage, then I don't know what will. This route is flat, circular and absolutely great for all ages. Starting in the stunning Cannop Valley, you sweep through mixed woodland in a stunning and tranquil setting. All eleven miles of the route are built with purpose-built surfaces. It's best ridden in a clockwise direction, and has link routes to nearby villages, as well as picnic sites for when you need some refreshment.

It's alarmingly easy to forget about Wales and the fantastic cycling opportunities it has to offer. This family friendly ride includes steam trains, stunning views of Snowdonia and Caernarfon Bay. It cruises down through avenues of trees between the historic town of Caernarfon and the village of Bryncir. The 12.5 mile ride starts near the striking Caernarfon Castle and is traffic free. It climbs over 500ft over 10 miles to its highest point which happens to be a radio mast south of Penygroes. The last part of the ride is a nice downhill stretch to the village of Bryncir.

I can't recommend this trail highly enough. It's one of the best rides I've ever done. It's incredibly safe, awesomely thrilling and utterly spectacular. You cycle along the cliffs on an old railway line, with sea views, high open moorland and rolling fields. I'm not exaggerating when I say that it has some of the UK's finest views. This is the North of England at its finest. The trail is sign-posted 'Cindertrack' for much of its length, so expect to get your wheels a bit dirty! Scarborough is home to one of the finest tourist attractions in the North - Scarborough castle. Well worth a visit after some ice cream nourishment.

When you think of Windermere, you will probably think of the bustling villages and the hordes of tourists. But that's on the eastern shore. On its western shore it's an entirely different story. Instead of hustle and bustle, there's serene woods, low fells and a wonderful feeling of calm. The contrast couldn't be any greater. Between the lake edge and the steep sides of Claife Heights there's the cycle track. It's a strenuous ride of about 14.2 miles, but it can be broken up halfway with a trip to the mock gothic Wray Castle. They have a lovely cafe serving Lakeland tea and Crayfish with Marie Rose Sauce sandwiches alongside all sorts of other treats. If you have kids on the ride, they can enjoy playing dress up and building their own little castle before you head back out on the trail.

Over 70 miles of the 99 miles of the Devon Coast to Coast are traffic free and it largely uses old railway lines. Starting in Ilfracombe in the North, and finishing in Plymouth in the South, this ride is perfect for new and experienced cyclists alike. Along the way, the route crosses the longest traffic-free bridge on the National Cycle Network, The Gem Bridge. It also takes in the Tarka Trail, a series of cycle paths and footpaths which follow the route of take by Tarka The Otter. Tarka the Otter was a significant novel by the author Henry Williamson. The route also skirts along the craggy edge of Dartmoor. If you are planning this route then it's advisable to book accommodation in advance. There's plenty of watering holes along the way, including The Yarde Orchard which serves homemade cakes, locally made ice cream and a range of specials made on the premises.

Visit Britain states that Britain is one of the best places in the world to see by bike. It's small enough to cross comfortably in a week so cycling holidays are a great way to sightsee. Its hills are challenging without being intimidating and its varied landscapes mean that the scenery is constantly changing. So what's stopping you? Get out and have some adventures that you can be proud of.

Do you only cycle to work?